The Brooklyn Cyclones are one of the Single-A teams in the New York Mets organization. They have been with the organization since 2001. They replaced the Pittsfield Mets. The team currently plays at MCU Park (formerly KeySpan Park from 01'-09').

The team was formed by current Mets owner Fred Wilpon and current Mets President Saul Katz. They both had interest in bring back baseball to Brooklyn after 40 years. The Cyclones are a company of it's current owner and operator Sterling Equities. The team is part of the Sterling Equities baseball family. The company's name is Sterling Cyclones.

Sometimes Cyclone games are broadcasted on SNY in Minor League Baseball by Kevin Burkhardt and Bob Ojeda. A special aired of what goes on inside the team which is called The Brooklyn Cyclones: Baseball on the Boardwalk.

WSOU is the current radio network for the Cyclones. WKRB (90.3 FM) was the official radio station of the Cyclones from 01'-11'. Warner Fusselle broadcasted the Cyclones on the radio from 01'-11'. He passed away on June 10,2012 just a week before the start of the 2012 season. He was replaced by David Rind, Vincent Coughlin and Chris Paizis who will split the broadcasting duties.

The original "Cyclones Beach Bums" were a promotional team of men and women who entertained the ballpark from 2003 through 2008, were seen all over the ballpark dancing, interacting with fans, and handing out promotional items. In 2009, the team decided to hire an all women dance team to replace the Beach Bums, but still retaining the Beach Bum name.

Since 2001 the uniforms have remained the same since then. Since their inception in 2001 the uniforms in the first season were dedicated to their inaugural season. There are 4 uniforms for the team. There is a white home jersey with Cyclones inscribed in red and the number is in red on the bottom left. The Mets logo is in light blue on the left sleeve. There is no patch on the right on the regular jersey.

The road alternate is grey and red. The shirt is grey and the sleeves are in red. On the front it has Brooklyn inscribed in it in red. The number is in red on the bottom left. There are no patches on the sleeves. On the back is no name of the player except the number in red. 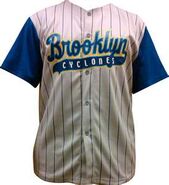 The road uniform with the Mets patch on the left. The cap is blue on top and light blue on the bottom. The BC is in yellow and white.

The blue alternate jersey. The number and name in white. The number on the bottom left. The lining on the arms is green,white and red. There are no patches on the sleeves. 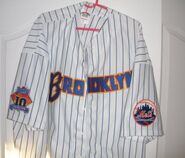 The pinstripe jersey. The 10 year anniversary patch on the right with the Mets on the left. Brooklyn in Blue,Yellow and Orange inscribed on it. 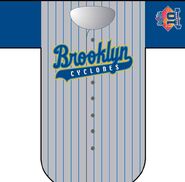 The Cyclones road uniform with the anniversary patch on the left. There is no Mets patch.

The Italian Heritage Night uniform. The jersey is blue with Cycloni in white and the number in white on the top left. The jersey has a Italian baseball coat of arms on the right. On the left is the BC logo with B in green and C in Red. The BC on the cap is in light green and red. 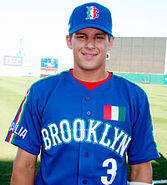 One of the other Italian Heritage Night jersey. It has Brooklyn on it with the flag of Italy on the top left. The number in white on the bottom left. The right sleeve with Italia. The sides have the colors of Italy lining. The cap has BC covered the same as the lining on the sleeves. On the left is the BC logo with B in green and C in Red. 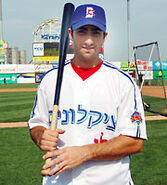 The Jewish Heritage Night Jersey where Hebrew is written all over the jersey including the number and the team name. On the left has the Cyclones patch. There is nothing on the right. The sides have a blue lining. The cap is blue and has BC in Hebrew style script.

The American Red Cross jersey. The cross on the bottom left. The number in black on the right sleeve and on the back. The red cross patch on the left sleeve.

The military jersey with Cyclones in white. The BC on the cap in brown as the cap is grey with a mix of brown.

The recycled jersey. The recycle sign on the right. The Cyclones in light green and blue. There is nothing on the left sleeve. 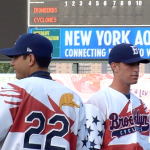 The Patriot uniform. The shirt is white with the Brooklyn Cyclones on top of the red. The same goes for the number on the back. The right sleeve has stars. The left sleeve has the number.

The Gary Carter remembrance jersey. The Kid 8 the one used by the Mets on the left and the BC in orange on the right.

The main mascot for the Cyclones is Sandy the Seagull. He has been the mascot since 2001. He is the adoptive father of Pee-Wee. Sandy is named for Brooklyn/Los Angeles Dodgers pitcher Sandy Koufax.

Pee-Wee is one of the main mascots for the Cyclones. He has been the mascot since 2003. He is the adoptive son of Sandy the Seagull. Pee-Wee was named after Brooklyn Dodgers shortstop Pee Wee Reese.

Maverick the Wonder Dog is the dog mascot for the Cyclones. He has been around only for the 2008 season. He was a real Chocolate Labrador Retriever who was owned by one of the Cyclones staff members. The goal was to have Maverick learn tricks like picking up baseballs and bats. Like the Pelican, Maverick lasted only one season.

In 2006, the team introduced a new unnamed mascot: a blow-up "ZOOperstars" type pelican. Despite a contest to name the character, it was never given an official name. The Pelican has not made an appearance since the 2006 season. Just like the Maverick the Pelican lasted only for one season.