The Buffalo Bisons are a minor league baseball team based in Buffalo, New York. They currently play in the International League and are the Triple-A affiliate of the Toronto Blue Jays since 2013.

They were the Triple-A team in the Mets Minor League System from 2009-2012. They replaced the New Orleans Zephyrs. They were replaced by the Las Vegas 51s who became the new Triple-A team for the New York Mets in 2013. The team played at Coca-Cola Field.

All Bisons games can be heard on WWKB-AM. Starting since 2009 Friday games aired as a Game of the Week package on WGR AM 550. These games are a simulcast of those airing on WWKB.

Since 2009 the uniforms have remained the same since then. In 2010 a new cap was introduced which features blue on top, black on bottom and a bison logo. In 2011 a new alternate jersey was released to be worn only on Sunday's during the season. For 2012 the all-star game returned to Buffalo. In honor of that 2 caps were introduced with one having the all-star game logo on the front. Another one was the original 3 caps with the game logo on the right of the cap. '12 is also the 25th season of the team. In honor of that the right sleeve of the uniforms has the logo. 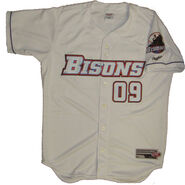 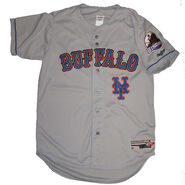 The road uniform is grey with Buffalo inscribed on it with the NY Mets script underneath it on the left. The Bisons patch is on the left sleeve. The name and number on the back is in white. 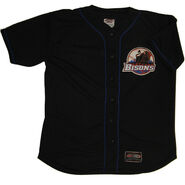 The alternate uniform is black with just the Bisons logo on the left. It contains no patches on the sleeves. The number and name on the back is white with orange lining covering up the surrounding of it.

The blue alternate uniform with Buffalo inscribed in orange. It has red/orange and black lining underneath the arms. It has the Bisons patch on the left sleeve. The number and name on the back is white with orange lining covering up the surrounding of it. 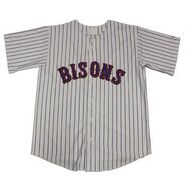 The 2011 alternate jersey worn on Sundays. It has Bisons written on the front. The Bisons patch is on the lef sleeve. The number and name is written in the colors of orange and blue. 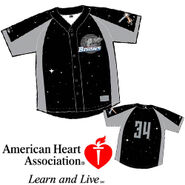 2012 Bisons stars wars night jersey. It has the Bisons star wars version logo on the left. The colors are black,grey and white. There are no patches except the lightsaber on the left sleeve. The number on the back is in grey.

The Jackets worn in 2011. There is a patch on the left corner in blue and orange. The blue is the home and the orange is the road. This is usually worn by the manager or coaches.

The BP jerseys with Herd inscribed on the front and the Bisons patch on the left. There is no number on either side.

The 2012 all star Bisons jersey with the Bisons in red and the number in black. The cap is black on top and red on bottom. The B on the top is in red. On the right has the all star game logo. On the right sleeve it has the 25th season patch. On the left it has a patch of a bisons with a bat. 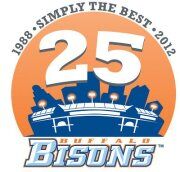 The 25th season logo on the right sleeve of the uniforms.

There are 3 caps for the Bisons. One is blue (Home), One is black (Road) and the other one is 2 toned with blue and black. On top of the cap is B representing the Bisons. On the left is the trademark of the company. 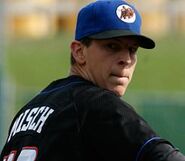 The logo on the cap on the side of the original caps. 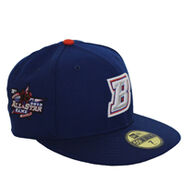 The 2012 cap with the all star game logo on the right side with the left empty. 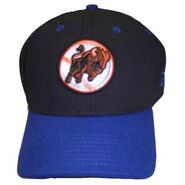 One of the two toned caps with the bison logo with the black on top and blue on the bottom. 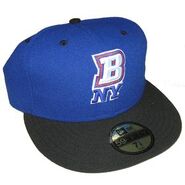 The alternate two toned cap with blue on top and black on the bottom with the B with NY (Mets) right under it.

The official mascot for the Bisons is Buster T. Bison. His number is 83 since 2010. He has a cousin name Chip. Buster is married to Bella the Ballpark Diva. They both had a love interest and got married in August of 2007.

Chip Bison is the cousin of Buster. His number is 1/2.

Belle the Ballpark Diva is one of the main mascots of the Bisons. She has been around since 2006. She is married to Buster. They both had a love interest and got married in August of 2007. 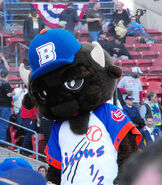 Conehead is one of unofficial mascots of the ballclub. He is a beer vendor who wears a rubber cone-head hat.