Sidd Finch was a fictional baseball player, the subject of the notorious article and April Fools' Day hoax "The Curious Case of Sidd Finch" written by George Plimpton and first published in the April 1, 1985 issue of Sports Illustrated. According to Plimpton, Finch was raised in an English orphanage, learned yoga in Tibet, and could throw a fastball as fast as 168 miles per hour (270 km/h).

In early 1985, Mark Mulvoy, the managing editor of Sports Illustrated, noticed that a cover date that year would fall on April 1. He asked George Plimpton to commemorate this with an article on April Fools' Day jokes in sports. When Plimpton found himself unable to find enough examples to craft an article, Mulvoy gave Plimpton permission to create his own hoax.

Plimpton reported that Hayden Siddhartha "Sidd" Finch was a rookie baseball pitcher in training with the New York Mets. He also wore only one shoe—a heavy hiker's boot—when pitching. Finch, who had never played baseball before, was attempting to decide between a sports career and one playing the French horn. What was astonishing about Finch was that he could pitch a fastball at an amazing 168 miles per hour (270 km/h), far above the record of a "mere" 103 miles per hour (166 km/h), with pinpoint accuracy, and without needing to warm up. The Mets scouting report gave Finch a "9" on fastball velocity and control: "8" is the highest score on the scale.

According to Plimpton, Finch grew up in an English orphanage and was adopted by an archaeologist who later died in a plane crash in Nepal. After briefly attending Harvard University, he went to Tibet to learn "yogic mastery of mind-body" under "the great poet-saint Lama Milaraspa", which was the source of his pitching prowess. Finch decided not to pursue a baseball career, instead choosing to "play the French horn or golf or something."

The story was accompanied by photographs of Finch, including one featuring a young Lenny Dykstra and another of Finch talking with the Mets' actual pitching coach, Mel Stottlemyre. The Mets played along with the hoax, even providing a uniform for Finch.

Finch was portrayed by Joe Berton, a junior high school art teacher from Oak Park, Illinois. Sports Illustrated photographer Lane Stewart recruited Berton, his friend, for the role. Berton posed as Finch for the photographs (usually with his face averted from the lens). Berton stands at 6 feet 4 inches (1.93 m) and wears a size 14 shoe.

Novelist Jonathan Dee, who was working as Plimpton's assistant at the time, described Plimpton at the time of the writing of the article as, "a wreck. Nothing, he knew," wrote Dee years later, "falls quite so flat as a bad joke. Such was his anxiety that, for the one and only time in my five years in his employ, he asked me to come in to work on a Saturday. I still remember my naïve astonishment at the sight of a world-famous, successful writer actually agonizing over whether something he’d written was good enough, funny enough, believable enough, or whether the whole thing would wind up making him seem like a national jackass." Dee also talked about his role in the Finch hoax in an outtake from the documentary film Plimpton! Starring George Plimpton as Himself.

The story was released in late March 1985. Mets fans were overjoyed at their luck in finding such a player, and flooded Sports Illustrated with requests for more information. The sports editor of one of New York's newspapers complained to Jay Horwitz, the public relations director of the Mets, for allowing Sports Illustrated to have the scoop. Two (unnamed) general managers called Commissioner of Baseball Peter Ueberroth to ask how their batters could face Finch safely. Meanwhile, the St. Petersburg Times sent a reporter to find Finch, and a radio talk show host claimed he saw Finch pitch.

The Mets gave Finch a locker between George Foster and Darryl Strawberry. The three major networks, CBS, NBC, and ABC, and the local St. Petersburg, Florida newspapers sent reporters to Al Lang Stadium for a press conference about Finch. At the April 2 press conference, Berton announced his retirement.

The subhead of the article read: "He's a pitcher, part yogi and part recluse. Impressively liberated from our opulent life-style, Sidd's deciding about yoga — and his future in baseball." The first letters of these words spell out "Happy April Fools Day - a(h) fib". Despite this clue and the obvious absurdity of the article, many people believed Finch actually existed. The magazine printed a much smaller article in the following April 8 issue announcing Finch's retirement. It then announced it was a hoax on April 15.

Plimpton eventually broadened his article into a novel, first published in 1987. The book discussed Finch's "brief re-commitment to baseball," in which stories of Sadaharu Oh and Steve Dalkowski, as well as Finch's girlfriend, inspire Finch to stick with baseball, and he reaches Major League Baseball with the Mets. 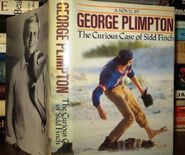 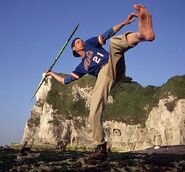 Joe Berton at a fair